“It is Our Duty to Remember”

The Wall of Names 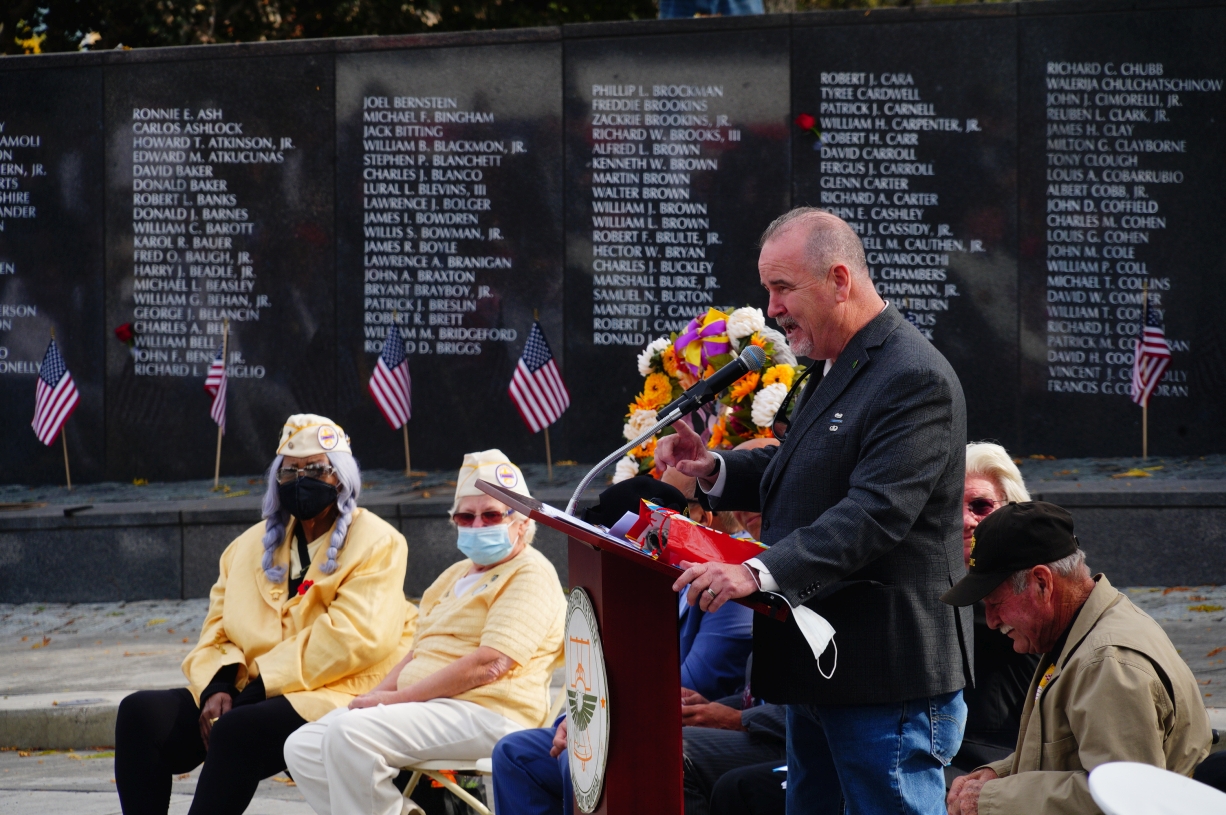 Philadelphia Municipal Court President Judge Patrick Dugan, who spoke earlier at the Korean War Memorial, addressed the ceremony’s theme of Standing in Brotherhood with the men and woman of Afghanistan and Iraq. The Memorial wants to involve more younger veterans from those wars. The newest Board member, Sergeant First Class Travis Senseny of the PA National guard, was introduced to attendees. Also attending was Kevin McClosky, who lost both legs below the knee in Afghanistan and delivered brief remarks. Joanne and Bill Malek were awarded certificates naming them to the Memorial Honor Roll for their work in promoting the Memorial panels listing the 648 lost in the war. More than 400 veterans and their family and friends attended the annual Veterans Day observance at the Memorial on Nov. 11 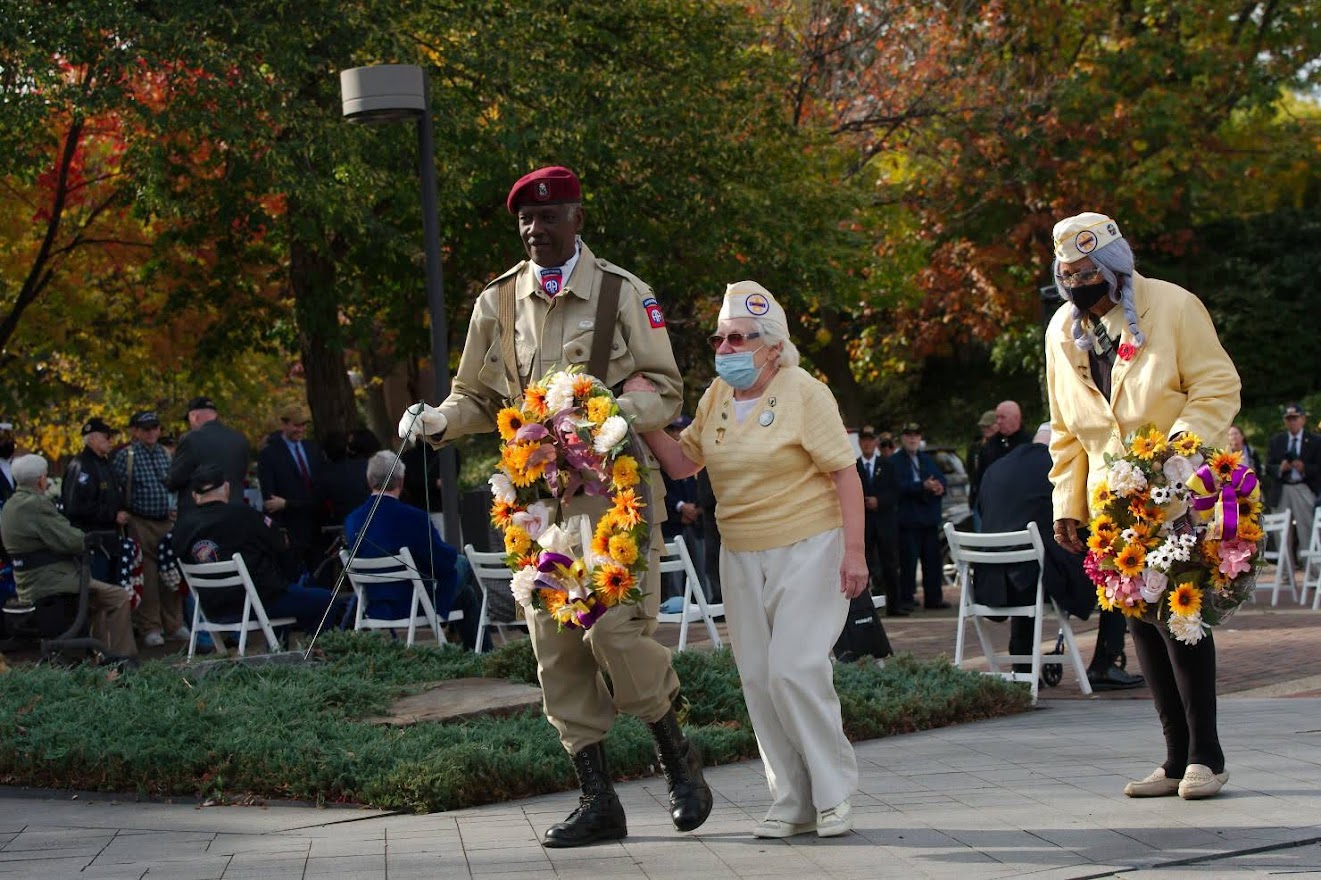 Standing in Brotherhood on Vets Day

The lack of a “Welcome Home” for Vietnam veterans forced many to internalize the pride of what we had accomplished.

We now have a new generation of veterans who served during the wars in Afghanistan, Iraq and the Global War on Terror. They have been appropriately embraced with the gratitude of our nation. This shift in attitude has not gone unnoticed by these new vets and they understands that the county’s current sentiment is the result of making things right for returning veterans. Pat Dugan, our speaker today, is one of the proponents of recognizing, as he has said, that today’s veterans stand on the shoulders of those who came before.

It is in that spirit that we dedicate this Veteran’s Day service to those who served in Afghanistan, Iraq and the Global War on Terror. We believe we stand in brotherhood with them, as well as our brothers and sisters from World War II, Korea and Vietnam. We weren’t always welcomed and believe it should never happen again for those who serve in harm’s way.

Finally, we are also proud to announce our new board member, Travis Senseny, a Philadelphia native who served two combat tours in Afghanistan and one in Iraq as an infantry NCO with the PA National Guard. He replaces James Birkhead, a Marine who served in Iraq, and was our treasurer for three years.

Travis will be with us to celebrate all veterans.

With the theme of “Standing in Brotherhood,” the Philadelphia Vietnam Veterans Memorial (PVVM) is honoring service from the wars in Afghanistan and Iraq at its Veterans Day ceremony on Thursday, Nov. 11 at 12:30 p.m. at the Memorial, Spruce Street and Columbus Blvd.

President Judge Patrick F.  Dugan of the Philadelphia Municipal Court, who will deliver remarks at the ceremony.  Judge Dugan served in a Civil Affairs unit and later as a Captain with the Army Judge Advocate General. Dugan did two tours of duty in 2004 (Iraq) and 2006-07 (Afghanistan).

Judge Dugan was first appointed to the Bench in 2007 and elected to the court in 2009, being retained in 2015. In his role as President Judge, he oversees the administrative operations of both the Criminal and Civil Divisions of the Court. Currently, Philadelphia Municipal Court is one of nation’s busiest courtrooms, presiding over 135,000 cases in 2018.

Dugan was one of the founders of Philadelphia’s Veterans Court, assigned there since its inception in 2010. In 2018, the Philadelphia Bar Association honored his Veterans Court Team with the Henry Czajkowski Award for excellence. One of the most widely recognized veterans in the area, Dugan retired as a US Army Captain in 2016. He also served as an enlisted airborne infantryman.

Judge Dugan is well known as an advocate for all veterans and, among his other roles, he is a member of the Boards of Directors of the Vietnam Veterans Memorial and Korean War Memorial, working to ensure the latter’s viability. Among Dugan’s military awards are the Bronze Star, Combat Action Badge, Parachutists Badge, Expert Infantryman’s Badge and Global War on Terrorism Service Medal.