The following remarks were made by Colonel Ward B. Nickisch, US Army (Ret.), at the Veterans Day Ceremony in Philadelphia, PA on November 11, 2018.

Other distinguished guests and especially my fellow Veterans.

This is a great day…now there is a difference between a good day and a great day:

Good day — when I can get out of Washington

Great day — when I can get out of Washington DC and spend it with fellow Veterans!

It is a special privilege for me to be here with you on this Veterans Day — the 100th Anniversary of the Armistice of WWI. We gather today to honor and remember the men and women of our Armed Forces who, throughout our history, have stepped forward to serve so that we might live in peace and enjoy our freedoms.

I’m sure you took note of the flag flying over this memorial. The symbolism should not be lost on us today, for that beautiful piece of cloth flies today because of those who served and sacrificed yesterday — our Veterans of WWI, WWII, Korea, Vietnam, the Cold War, the Gulf War, and those of the deserts in Iraq and the mountains of Afghanistan – many of whom we are privileged to have in the audience today!

But why should we have special days with events, monuments, and ceremonies like the one we share today? Simply stated, we have them to ‘honor and remember’ …we honor and remember those who have served in the defense of our liberty and freedom……and when you understand our Veterans and the Warrior Ethos, you realize that…

•they do not fight for the glory of war, but for the prize of peace.

Events such as this go back to Biblical times…

•In the book of Joshua, Chapter 4, after crossing the Jordan River, Joshua directed the tribal elders to take stones and build a monument. Tribal elders asked Joshua, why are we building this monument of stones?

•Joshua answered saying: We do this so that when your children ask what do these stones mean, you can tell them of the history of our people and the sovereignty of God!

So, in similar fashion, we can visit monuments around this country that tell the history of our people and pay tribute to our Veterans.

Come with me to Lexington and Concord, and the ‘shot heard ‘round the world’…. there you will find a statue of a colonial patriot standing with one hand on the plow and the other holding his musket at the ready; and there you will find inscribed the words of Captain Parker,

“Stand Your Ground…Don’t fire unless fired upon; but if they mean to have a war, let it begin here!”

So, when our children ask what do these stones mean, we can tell of the American Veteran’s Spirit of Determination to secure and defend liberty.

Next, join me on a short trip to the battlefield of Antietam in western MD. This was the site of the bloodiest day in American military history with over 23,000 killed, wounded or missing in that 12-hour battle of the Civil War in September 1862.

In the center of the battlefield is a cemetery and in that cemetery there is the statue of a lone Civil War Soldier, and on the base are inscribed the words: “Not for themselves, but for their country.” So, when our children ask what do these stones mean we can tell them of the American Veteran’s Spirit of Selfless Service to nation and fellow citizens.

So, when our children ask what do these stones mean? We can tell them of the devastation of war, the sacrifices of those who served, and the price paid to secure our way of life.

And while these stones speak of the tragedy of war and loss of life, they also speak to the brotherhood of the Warrior and the pride that is earned in honorable service exemplified by many of you Veterans here in the audience.

This is also an appropriate time and place for us to single out, with profound respect and solemn tribute, those who died and did not return from our prior wars and conflicts —- those that we affectionately refer to as our POWs and MIAs.

Prior to my retirement I served as Deputy Adjutant General of the Army and Director of Casualty and Memorial Affairs. In that position I supervised the unit responsible for the POW/MIA search and recovery efforts.

Today, that mission has been elevated from the Army to the Department of Defense and now falls under the Defense POW/MIA Accounting Agency (DPAA).

To understand the magnitude of the agency’s workload, we need to recognize that we still have 1,592 unaccounted for who have yet to return home from Southeast Asia (Vietnam, Laos, Cambodia); more than 7,600 from Korea, and more than 72,000 from WWII. Of those numbers, there are 89 Pennsylvanians still missing from Southeast Asia – including 10 whose Home of Record is shown as being from Philadelphia,…Pennsylvania still has 554 missing from Korea, and 4,735 from WWII.

The agency has had teams in some 46 countries over the last few of years to search for, recover, identify, and return the remains of our missing to their families.

Of course, all of us were very excited and pleased with the return of the 55 boxes of remains by the North Koreans last July following President Trump’s Singapore summit with Chairman Kim Jong-Un of North Korea.

Although there were 55 boxes, we cannot correlate that to 55 individuals – we simply don’t know the number of individuals who may be represented in those boxes. However, there were two sets of remains that were relatively complete; and those two individuals…

MSG Charles McDaniel and PFC William Jones were identified in September using dental records, chest X-rays, anthropological analysis, and mtDNA matching. The pain-staking forensic work on these 55 boxes will take months – if not years — but as General McKeague, the DPAA Director, has said…’the mettle of our scientists and the capabilities of our laboratory will be challenged’…but the scientific team is confident more identifications will follow.

I was privileged to be a member of the U.S. Delegation which sat down with the North Koreans and negotiated putting one of my recovery teams into North Korea in July 1996. We were in North Korea each year from 1996 through 2005 when it unfortunately became necessary to suspend operations.

But I’m hopeful that with improved relationships we will be able to resume those Joint Recovery Operations with U.S. and the DPRK working together on recovery our warriors still missing in the North.

In the big picture, during Fiscal Year 2018 (which ended 30 Sep 18) the agency was able to identify 203 of our missing from prior wars and conflicts. And in the month of October, they were able to complete identifications of 20 more.

It is this noble mission of the DPAA that forms another one of those living ‘stones’ or living ‘monuments” in our nation’s history.

So, when our children ask what does the work of the DPAA ‘stone’ mean? We can tell them of the 4th pillar of the Soldier’s Ethos which says, “I WILL NEVER LEAVE A FALLEN COMRADE”, and that is true of the battle fields of today or those of decades gone by. And we can tell them of the work being done by DPAA to fulfill America’s promise to achieve the fullest possible accounting of those who remain missing.

So here, this Veterans Day, we offer up our heartfelt gratitude and respect for the brave men and women who, from Valley Forge to the current Contingency Operations and those who are currently manning their duty stations and ‘standing watch’ in some 150 different countries. They answered the clarion call to duty and donned the cloth of our nation to serve their country — we honor them! We also remember the more than 1.3 million who have died doing so.

Let me leave you with this final thought…

As hard and all-consuming as war is, we cannot forget its aftermath —- the broken bodies, the invisible wounds of the minds, the broken spirits and the fractured families that require the continued attention of a grateful nation.

As a country we must remain committed to providing our full support to our Veterans, our Wounded Warriors, and to their families — and we must ensure our Veterans receive the health care and other benefits they have earned through their service.

They stepped up and did their part —– and as a nation, we must do ours!

It has been my pleasure to share this day with you, and I want to thank Terry Williamson and his team of the Philadelphia Vietnam Veterans Memorial Fund and everyone involved in making this event possible.

I know that Terry and the Memorial Fund are in the midst of a campaign to build the POW/MIA monument, and I look forward to its completion in the near future and I applaud the people of this great city and state for creating this new monument which will be another one of the “stones” where we can pause, honor, and remember our Veterans.

Again, it has been my pleasure to share this day with you.

May God be pleased to grant His blessings on our Veterans and their families…and on this great country. 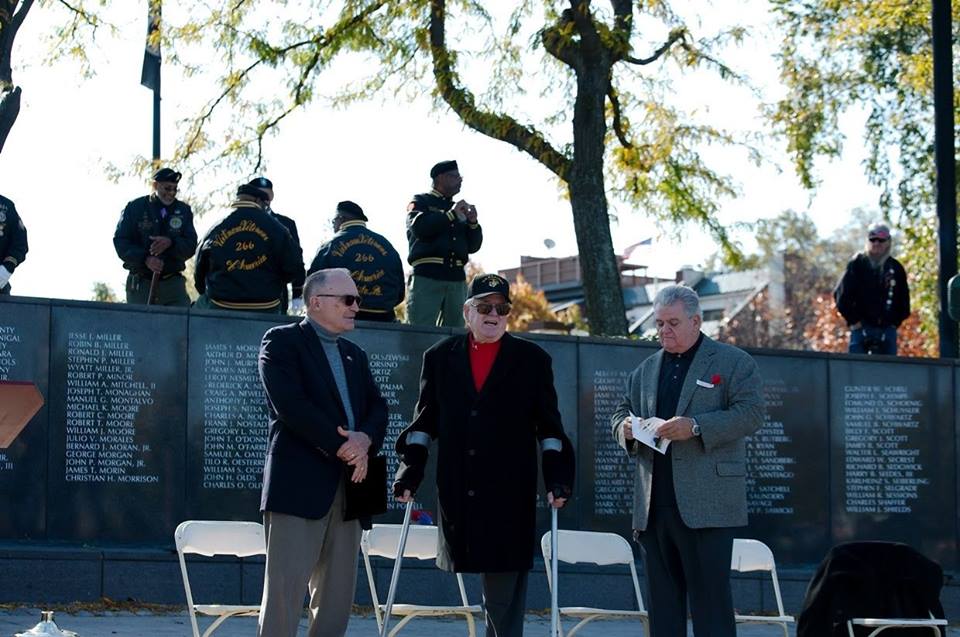