Dedication of the National POW/MIA Monument 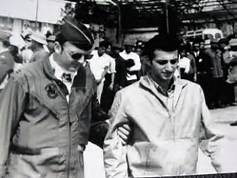 Former North Vietnamese Prisoner of War Ralph Galati will give keynote remarks during the dedication of the National POW/MIA Monument at noon at the Memorial on March 29. Galati, who serves on the committee to build the Monument, spent 14 months at the infamous Hanoi Hilton. The Monument is being completed after a two-year campaign by the PVVM Board of Directors and is the only Monument dedicated to those POW/MIAs from the Vietnam War. There were 19 Philadelphians who were POWs or listed as MIAs, body not recovered, at the end of the War in 1975. The remains of nine of the missing have been returned and the remaining 10 are among about 1,600 sill missing from the Vietnam War.

It is expected that MIA family members will be in attendance “We are so proud to host the National Monument at the Memorial,” noted Terry A. Williamson, PVVM president. “It is our fervent hope that never again will so many Americans be imprisoned or listed as missing. We are of course also mindful of the pain of the families of the missing, including 10 from Philadelphia, and hope this Monument will offer some solace.”